A World War One Ghost Story, set in Charters Towers

The following article and poem by Anne McCosker appeared in  High Tide, the parish magazine of St Paul's Church, Weymouth in September 2014.
St Paul's is in Abbotsbury Road, in Westham, and during WWI the Westham Anzac camp, where Fred Martin convalesced, was within a stone's throw of the church.

Lieutenant Martin’s Letters,  an Anzac in the Great War

One hundred years ago, on 4th August 1914 my uncle Fred Martin - my mother’s only brother – left Queensland in an Australian regiment en route for German New Guinea.  Germany at that time was a considerable threat to the young Australian nation with its powerful Pacific naval fleet, and a wireless transmitter with its direct, strong link to Berlin operating from this German controlled territory.

A year later in September 1915, Fred Martin, after being wounded and contracting typhoid in the Gallipoli campaign, was en route via Malta for England.  Discharged  from Birmingham hospital, unfit to rejoin his battalion, he was sent to convalesce in Weymouth.  From January 1916 till August 1916 Fred lived mainly at Westham Camp just up the road from St Paul’s!

Having been unable to read for decades the over fifty letters and cards of my uncle’s given to me my aunt - it was just too painful for me to read them - I was naturally astonished when I first read   “Westham Camp, Weymouth”  at the top of one of these letters.  Suddenly, I found I was living in direct sight of the hill at the northern end of what had been Westham camp!   This was a few years after we had moved to Weymouth.  Once I read this address, I knew I must and could write  Lieutenant Martin’s Letters.

Writing this book has been a painful and at times distressing work, but a sense of love and duty has inspired me.  However it seems to me that some people with no direct close connection with WWI forget the suffering of real people, still alive, when they are organising these centenary commemoration events.

My mother and Fred grew up in a strong Christian family and this is reflected in my uncle’s letters home.  I am almost certain he would have attended services at St Paul’s. This was the closest Anglican church to the camp. Situated as it is on the Abbotsbury Road, St Paul’s would have been passed every day by Australian soldiers coming and going from Westham Railway Halt and theTown centre.  I am always very aware of this when I pass the Cross of Remembrance outside the church.

After Fred Martin left Weymouth he fought on the Somme, won the  M.M., was promoted Lieutenant. He was killed at Polygon Wood, Passchendaele in September1917, aged 21.  He has no known grave. When Fred went to the Front he left his personal belongings in Weymouth and it was from here that my grandparents in far away Queensland eventually received some of them. Fred Martin like most men from the South Pacific never went home on leave after he first left for overseas. Only these few of his belongings returned.

Lieutenant Martin’s Letters is based on my uncle’s letters. I have also tried in the book to give some idea of the life and times of Weymouth that my uncle knew. The Australian at Weymouth was a newspaper produced and published by the troops themselves between June 1918 and the ending of the camps in June 1919.  It has been a great help and for this I am grateful to Fred Larcombe of Weymouth. He and his wife Peggy (they were married in St Paul’s in 1956) were for many years co-partners of Sherrens the firm that originally printed the paper.  They had the vision to keep one complete copy of every issue of the publication.  This may be the only one now in existence.  It was Dr Richard Buckley who ferreted out this fact - until then this complete set was not generally known about.  In these papers there are fascinating articles by amongst others the Australian  ‘Padre  C.A.J.’,  whose sketches include one of St Ann’s, Radipole.  I will always remember the late John Easton (himself a WWII veteran of the Arctic Conveys) from Melbourne St. Westham , who first walked with me around the exact area of the Westham camp.  He was so anxious that the facts about the Australian camps in Weymouth be well known.

There is much discussion during this centenary year about the point of the Great War and the sacrifice of so many.  My father was also a WWI veteran, my great aunt a nursing sister on the Western Front;  both, as was my uncle,  members of the First Australian Imperial Force. I and my family before me have well known about and felt War’s  devastation. However even after the rather harrowing, at times, work I have done on Lieutenant Martin’s Letters I still believe as I wrote in my poem*  in 2003:

All those young men dying
Did they find
There,
In war
Light beside them.

A Presence radiating
Energetic calm
In gathered to itself
Within and yet apart
From all the slaughter.

Is this the purpose?
Can hope come from dead men
Who caring to be human
Gave Love in spite of Satan
Clawing at creation.

My book is available locally from  Books Afloat, Park St, Weymouth, as well as Amazon. Price £14.99 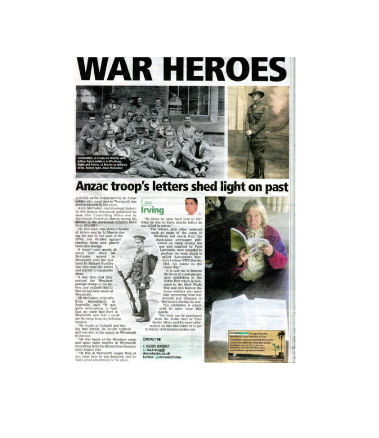 The origins of Anne McCosker's book about her uncle,  Lieutenant Martin's Letters.  His preserved WWI letters,, his life, his war, his time in Weymouth during 1916, and his death on the Western Front.  And the continuing influence of his life on his descendents.

The  SS Kyarra  was a familiar coastal steamer before WWI on the Brisbane River, In November 1914, she was requisitioned as a troop ship and hospital ship.  Fred Martin sailed to Egypt on her in early 1915.

The  first major contingent of Queensland army nurses to leave Australia sailed on the Kyarra on November 14th.  Annie Scott, Fred’s aunt – his mother (Susie’s) sister sailed on her.  She is on the far left of the picture.

Anne knew Annie Scott - her great aunt - very well, as she lived with Anne's family throughout her childhood.

Article about the SS Kyarra from the Dorset Echo,

She was sunk off Swanage in 1918 by a German submarine, and is now a popular diving target. 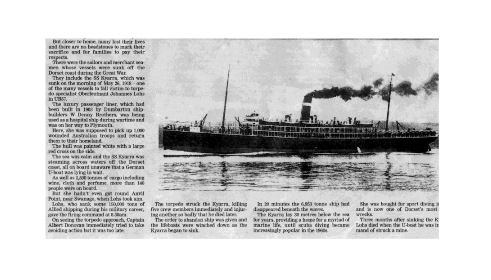 In June 2014, BBC Radio Solent broadcast a programme in which Anne McCosker spoke of her uncle, and some of Fred Martin's letters were read.  This featured in the  Anzacs in Weymouth  episode from the series  World War One, the Home Front.