This article was published in  Una Voce,
the magazine of the Papua New Guinea Association of Australia (PNGAA)
September 2007, p 44 - 46

It was December 1974 when I last saw my birth town, Rabaul.  Now in 2007 I had returned.   Perhaps because I had spent the intervening years researching, writing, publishing Masked Eden a History of the Australians in New Guinea, as well as writing poetry about the Islands, nothing seemed unfamiliar.  Or perhaps it was because my personal roots are there, its tragic history mine.

A few minutes into the drive to Rabaul I said to myself   ‘this reminds me of somewhere’ and myself replied   'it reminds me of itself’! Nothing seemed strange, changed, and yet of course almost everything had changed, even the airport was different.

As we drove towards Kokopo there were the glorious palms trees, the bushy cacao trees and the flowering shrubs.  The smell of copra, pumice ash, frangipani, damp earth, coconuts, sharply caressed me.  Through Kokopo, that had certainly changed. The road towards Rabaul goes inland more now but there were the Bee Hives, and a - much larger Vulcan. Again the excitement of seeing that great harbour and across its waters Tavurvur energetically throwing black ash about.  And so along Malaguna Road, surely this was not the road I remembered.  We turned into Mango Avenue.  No photos or descriptions had prepared me for such desolation.  The town was no more.

We stopped at the Rabaul Hotel, alias Hamamas, alias Ascot, alias --- where we were to stay.  I had stayed there as a child and in the 1970s.

In the following days I walked the blackened streets and remembered.  In some ways it was easier in this semi ghost town to visualize those people I had known, written about, and whose achievements and adventures I had some inkling of, than if Rabaul had been jammed with tower blocks.  But that beautiful place of so many flowers where had it gone?

I sat in the yet once again restored New Guinea Club imagining my father after WWII, in the then restored N.G.C., drinking from his special N.G.C. emblemed  pewter glass-bottomed beer mug,  enjoying the company round him but always remembering his lost friends from pre war days, men like Nobby Clark who had once been so active in the club.  I still have this mug, a post war one of course, war destroyed all my father’s pre-war belongings.

The New Britain Lodge and a few other places I had known remained.   Strange to see the white lines in roads marking junctions, parking bays, and concrete steps leading to no where.  This sighting of concrete steps, water tank stands, bungalow bases, happened too after WWII.  And yes almost the only European house in the heart of old Rabaul still standing, now the Alexanders’ home, was the place where my first three books of poetry had been published - by Trinity Press. Nothing is left of the Europeans' Namanula Hill.   The hospital where I was born has disappeared back into a tangle of flowering shrubs and trees, these, and the ubiquitous bits of concrete are all that remain of the once beautiful gardens and bungalows.

I saw again that view from the Observatory, surely one of the most glorious in the world, even with Tavurvur belching ash everywhere.  It seemed all my life was spread out before me, sea and harbour, mountains, islands, palms.  We talked to the present vulcanologist Steve Saunders, and discovered he and I had the same Alma Mata, Royal Holloway New Bedford College, University of London.  I gave him, for the Rabaul Historical Society, in which he plays an active part, copies of some of my poetry books and a copy of Masked Eden.  In that book he discovered I had material about Tavurvur not previously known in the Observatory.   We also discovered that Masked Eden is being plagiarized on the Internet!

I hope that now I have given a copy of Masked Eden to the RHS there will be more historical knowledge and understanding about pre WWII New Guinea.  For me the greatest difference between 1974 and 2007 was this lack of knowledge.  Even early post WWII history seems vague to so many.  The New Guineans we met were willing to listen, ask questions, find out.  And some of the older ones, remembered their own childhoods, or had heard stories from their elders.  These were eager to talk, and made us feel very welcome.  I was able to give them forgotten names of places and tourist sights.

We went to Bita Paka and Cynthia Schmidt who was with me saw yet again that her father's name was not on any memorial to those lost during WWII.  Bob Kennedy, best man at my parents' wedding is buried there as are so many other men whose names are mentioned in my work.  Bita Paka is, as are all CWG cemeteries a beautifully kept place but there are discrepancies in the various lists of the European dead.  And I felt a desperate sadness that still there is so little real knowledge in Australia of the events that led up to the deaths of so many men from so many nationalities.  I also went to the European cemetery in Rabaul.  Although freshly mowed this, in contrast to the WGC cemetery is much neglected, all the plaques stolen, names lost.  I had hoped, but did not, find amongst others, Noel Barrie's grave.

We went to Malaguna Technical College, where Cynthia's father was pre WWII head teacher and talked to the present headmistress.  This fine lady was shocked and angered that she’d never been told of my work, although she had studied at the University of  PNG, Port Moresby.  To me though it vindicated what I have been saying for many decades.  She hopes now to use my poetry as it should have been these many years.  She could see the part Rabaul, New Guinea, has played in the well springs of my creativity and felt proud that my work is now being read world wide.

Almost no one knew either about Rombin.  However I was told the names Rombin/Robin and Danny Mark are given to children in the area around Matala and Kambubu SDA Mission.

I had hoped I might get to Matala, my family's plantation, south of Rabaul.  It was not to be.  Lack of knowledge, confusion - the few residents who could have helped were not in Rabaul - stopped us.  There are now two roads south.  The fairly flat coastal road to Put Put, Matala and beyond has - again - no bridge across the Warongoi and with no transport arranged on the other side one cannot proceed.  That historical, important road  through the once wealth producing plantations of the Gazelle Peninsular is now almost impassable and  forgotten, even though this is the road the majority of European men in 1942 fled south on.   There is now another road inland through mountainous country, also at times impassable, which seems to have become the main road.

St George's Anglican Church, Rabaul, like other churches in the vicinity was not destroyed by the 1994 eruption and was as I remembered it.  The Good Friday and Easter Day services were dignified, spiritual and simple in the best traditions of the Anglican community as wellas so perfectly mirroring the character of the people who worshipped there.  And as in the best Anglican tradition the church was lovingly decorated with flowers for Easter Day and the gardens around the church kept tidy and bright with flowering shrubs and trees.

Both the services were very emotional for me.  On Good Friday so many European men of pre WWII Rabaul seemed to be sitting about me in the church.   I was thankful then for Easter Day.  All the hymn singing was wonderful, I realized that I have always wanted to sing hymns as the locals did, they shouted them out with gusto.  I most heartily joined in!

What a great job all those involved with St George's - one of the historical churches of PNG - are doing.  They have little outside support or money for general expenses and Tavurvur's behaviour means the church's structure needs constant attention and now major repair.

Will I go back to Rabaul?   Yes, God willing!  But then I know now that in some senses I have never left New Guinea. 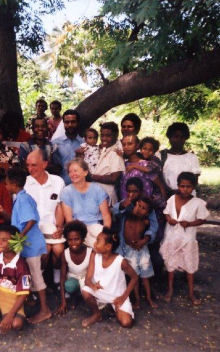 Anne McCosker Buckley and Dr Richard Buckley with some of the congregation at St Georges Anglican Church, Rabaul, Easter 2007.

Anne's, and her sister Robin's parents, were married in St Georges in December 1929.  Like some other 'Beforers' - pre-WWII families - they had close ties with this church.

At Christmas, 1974, the last before PNG independence, Anne took Communion at St Georges.  In 2004, following the Lambeth Conference in England, Anne presented the Anglican Archbishop of PNG with copies of her latest book of poetry, Witch Doctor, and of Masked Eden, a History of the Australians in New Guinea. 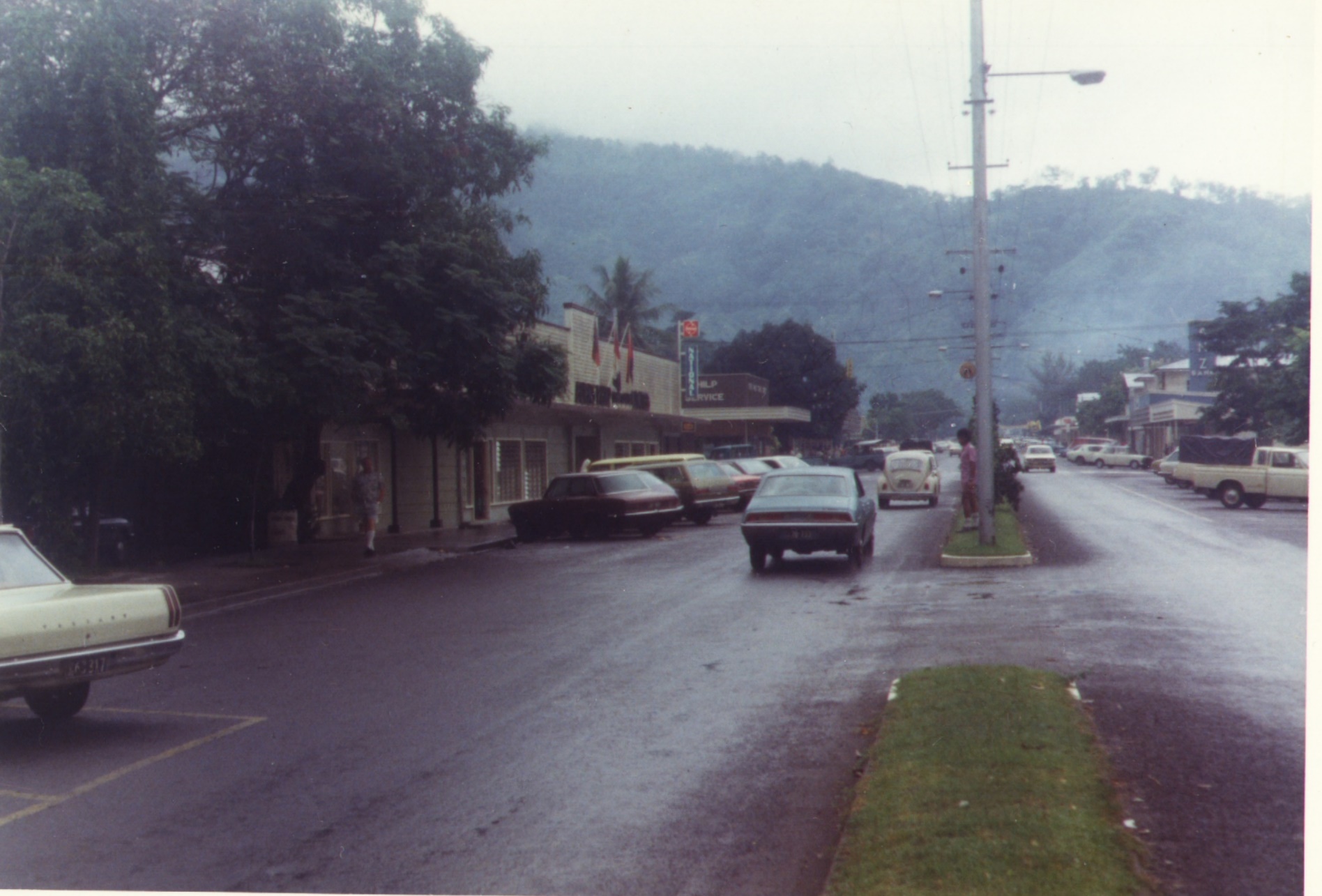 This is Mango Avenue in 1974, looking North.
The Rabaul Hotel is in the distant right. 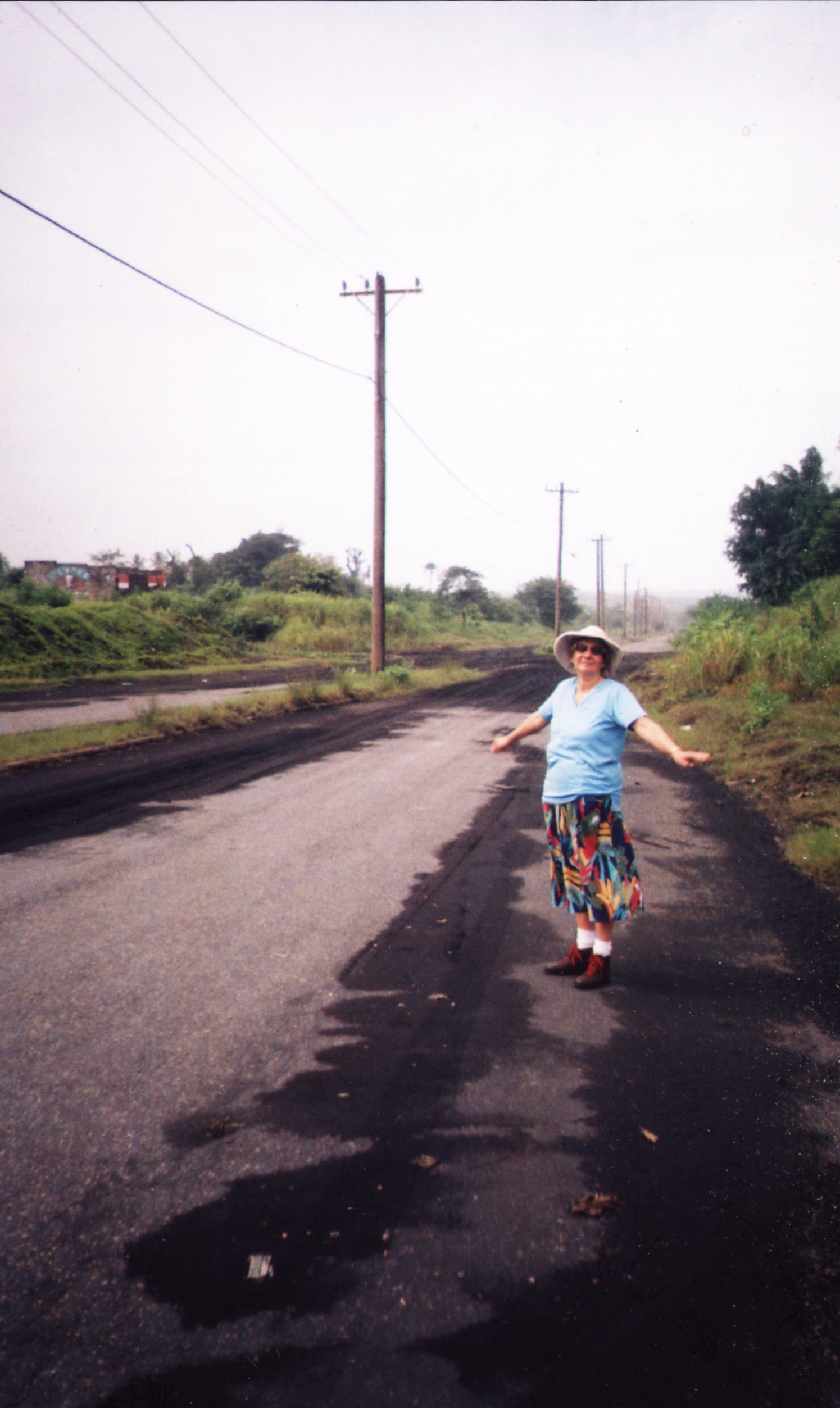 Nearly all the buildings in this area of Rabaul were destroyed by the weight of volcanic ash in 1994. 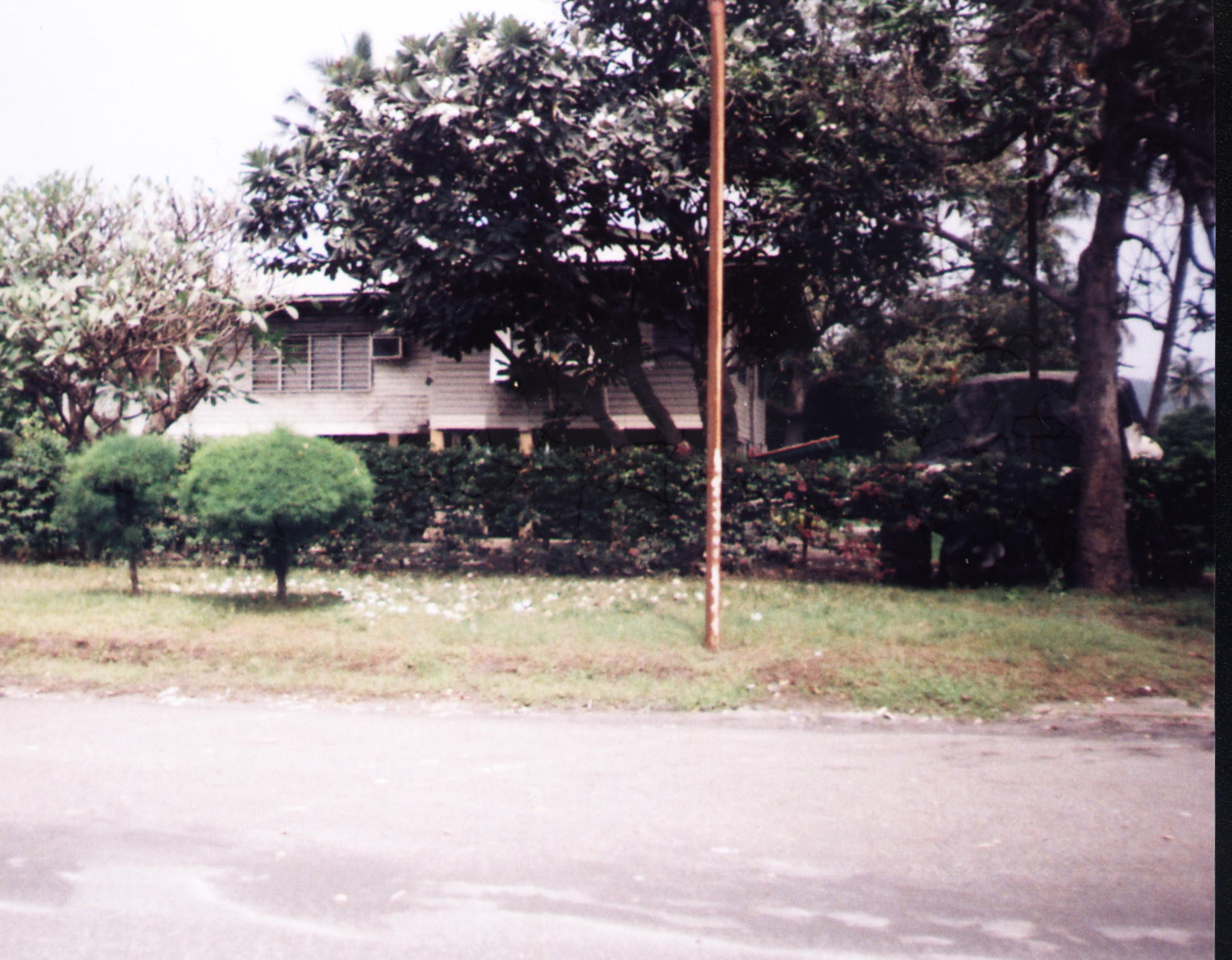 The Trinity Press Building in Mango Avenue, 2007.  It is now a private home.

Anne McCosker's first three books of poetry were published here in the 1970s. 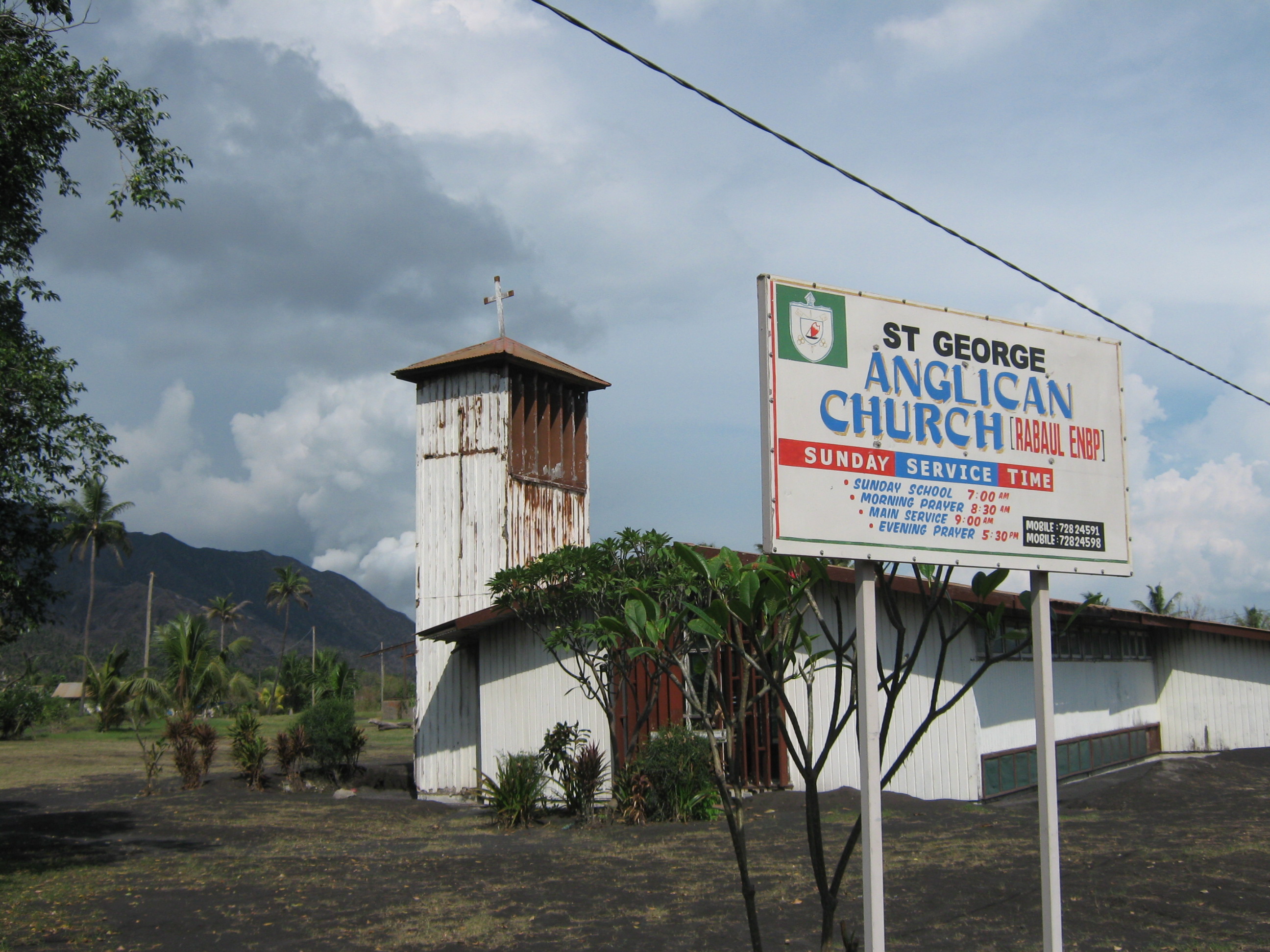 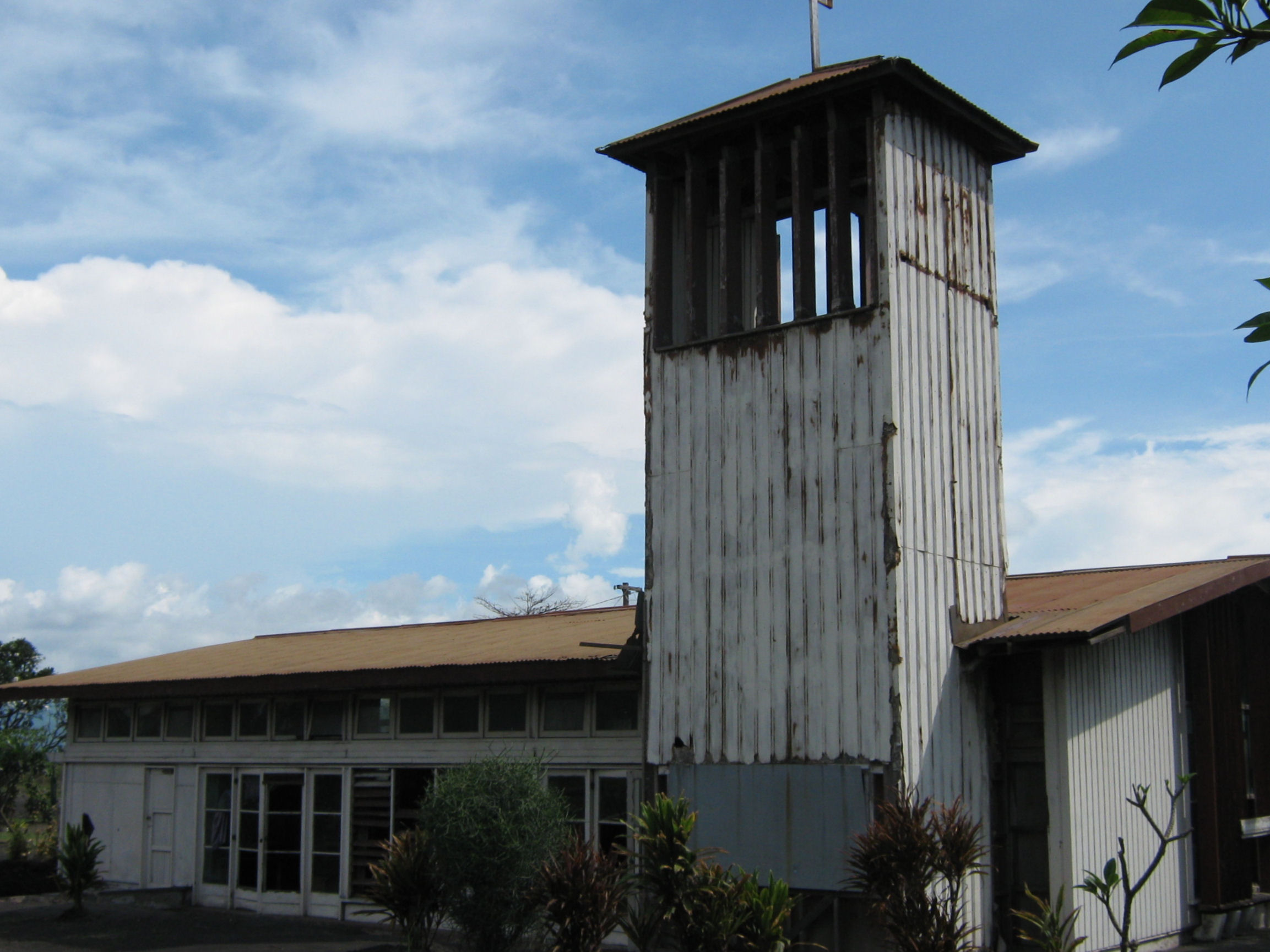