A History of the Australians in New Guinea

Masked Eden is a story of love and beauty, gallantry, courage and betrayal.

The wonderful pioneering spirit of Australians is seen - often in co-operation with the New Guineans - struggling with the incompetence and ignorance of a small elite in Canberra and Rabaul.

The Fall of Rabaul to the Japanese in 1942 - when over 1000 Australian civilians and soldiers were lost; the greatest purely Australian tragedy in her history - is, for the first time, fully examined using original material gathered from the nation's archives and the author's personal collection.

Rabaul fell before Singapore, the significance of which is still not widely appreciated, particularly by Australians. Rabaul was the sole responsibility of Australia. It was therefore unlike all other Australian war losses. Responsibility in these other losses was dispersed among several nations.

Many letters and articles are published in Masked Eden. Perhaps the most important of these is Stan McCosker's six page report regarding events in Rabaul leading up to the fall of the town to the Japanese in January 1942. (McCosker was there until hours before this event). His subsequent treatment by the Australian establishment has probably much connection with this report.

Rombin (see photographs) was the McCosker's overseer and friend. The book 'Seventy Thousand to One' by Quentin Reynolds - well known American war correspondent - is based on Rombin's rescue of the American airman Gordon Manuel. One of the greatest personal achievements of friendship by a New Guinean to a European during WWII.

An important chapter deals with the 'Montevideo Maru', the Japanese ship on which so many Europeans (civilian and military) from the Rabaul area are alleged to have perished when it was sunk by an allied submarine in early 1942. The author holds - perhaps more than any other scholar - material available from pre WWII European residents of New Guinea, concerning this mystery. Critical evidence from the National Archives is also included.

Anne McCosker is well suited to write Masked Eden. A  B.A. History Honours degree from the University of London gave her the discipline and discernment needed to collect and correlate the large amount of available material. This was added to her personal knowledge. Her father first went to New Guinea in 1924. He married Marjorie Martin in Rabaul in 1929 - then the capital of the Mandated Territory of New Guinea. Later the partnership of 'McCosker and King' bought Matala Plantation. New Guinea would dominate her childhood even whilst being educated in Queensland, Australia.

Masked Eden is an important contribution to WWII studies, and will be enjoyed by all those interested in the facts of history.

Masked Eden is now out of print. Some new copies are still available from Anne McCosker. Please contact her via this web site - Click Here

Queries from any country please 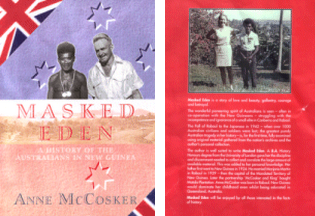