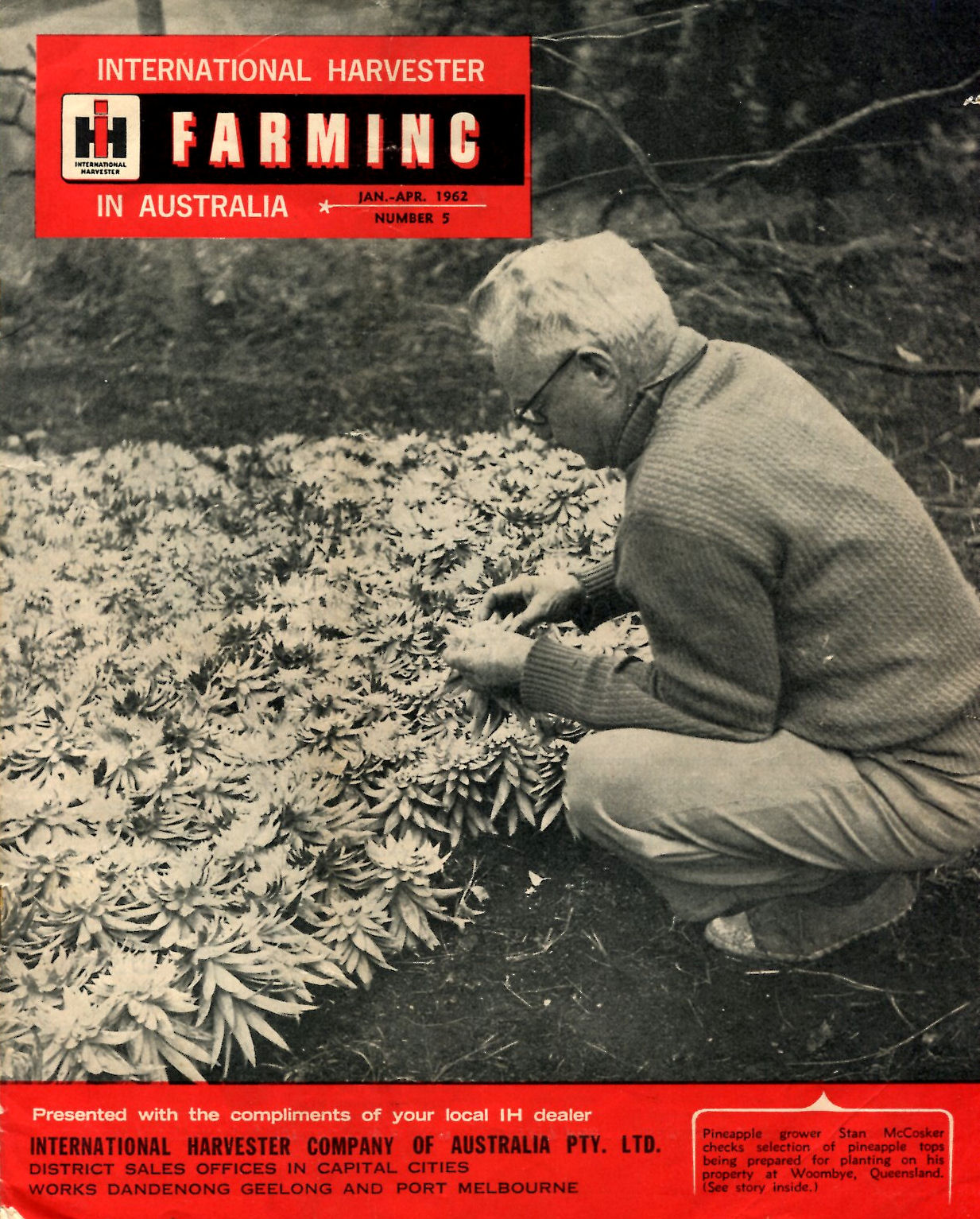 FROM  COCONUTS TO  PINEAPPLES

On his return to Australia after the first World War, Brisbane born Mr. Stan McCosker suffered from a complaint common to many returning war veterans—he had "itchy feet" and felt somewhat disorganized.

Still filled with the spirit of adventure he headed out across the Pacific to the Kokopo district of New Britain, south of Rabaul where he took a position as overseer with the Expropriation Board. This organization had been formed to take over and maintain all coconut and cacao plantations that had been German-owned prior to 1914.

In 1926, when the plantations were sold by public tender, Stan McCosker joined the Melanesia Company as district controller and inspector. Seven years later he went to Burns Philp & Co. as a plantation manager and in 1935 purchased his own plantation "Matala" - 5,000 acres and 50 miles south of Rabaul. But there were difficult times ahead.

As a result of the disastrous volcanic eruptions of Matapi and Vulcan, at Blanche Bay in 1937, the whole area was deluged with volcanic dust, some 4,000 natives were killed and many were made homeless. But planters like Stan McCosker came to the rescue giving food and shelter to many of those who suffered.

With the advent of war, Mr. McCosker sent his wife and two daughters back to Australia and joined the N.G.V.R. as a rifleman. With the fall of Rabaul he returned to Australia where he re-enlisted in the Army to later return to the Islands. And in his own words, "I was discharged at ten minutes to eleven on February 28, 1946."

On his return to "Matala" after the war he found it had been devastated by the ravages of war. The plantation originally contained 50,000 coconut palms and 100,000 cacao trees, but only 187 cacao trees remained, and many of the palms were badly damaged.

He stayed in New Britain until 1955 gradually rebuilding the plantation. At the same time he felled and sold quantities of the valuable timber on the property. He also tried his hand at prospecting - at a location three days walk from his plantation. But while he did discover some deposits of copper, gold and silver, the difficulties that had to be faced to get working equipment into the area made the venture un-economical.

As his wife was not enjoying the best of health, in March 1956 he returned to Australia. In the meantime he had purchased a pineapple plantation at Woombye, Queensland, which had about three acres and 53,000 pine-apple plants under cultivation. While this was a little different from the broad acres of "Matala" it offered a new challenge to Stan McCosker. By following the guide of the Department of Agriculture and Stock, and learning from successful pineapple planters he soon established a worthwhile plantation. Today he has 16 acres and 250,000 pineapple plants under cultivation. The farm comprises 44 acres, all of which has been developed. Some is under fallow, and what is not planted with pineapples is under a cover crop of sorghum.

Practically the whole of Australia's pineapple crop is produced in Queensland, on frost-free land within the coastal belt. The major producing areas in their order of importance are the Near North Coast, Rockhampton, Gympie, Brisbane, Maryborough, Magnetic Island, Cairns and Bowen. Today the area under crop is about 12,500 acres and production amounts to 3 million cases each of  l¼ bushels.

The industry is not highly mechanized although land preparation, cultivation and some fertilizing is done with machinery. Mr. McCosker uses a range of IH equipment which includes McCormick International chisel and disc ploughs, ripper, toolbar and carry-lift platform. For tractor power he uses the popular B-250.  English migrant Tom Reynolds who is Mr. McCosker's assistant handles all the tractor work on the property.  Tom migrated to Australia with his wife three years ago and had his own farm at Palmwoods before he came to the Woombye plantation.

Stan McCosker's farming interests have been somewhat varied and wide-spread when compared with the activities of the average Australian farmer. However Stan McCosker, and all successful farmers wholeheartedly agree that you can only take out of the soil what you put into it. 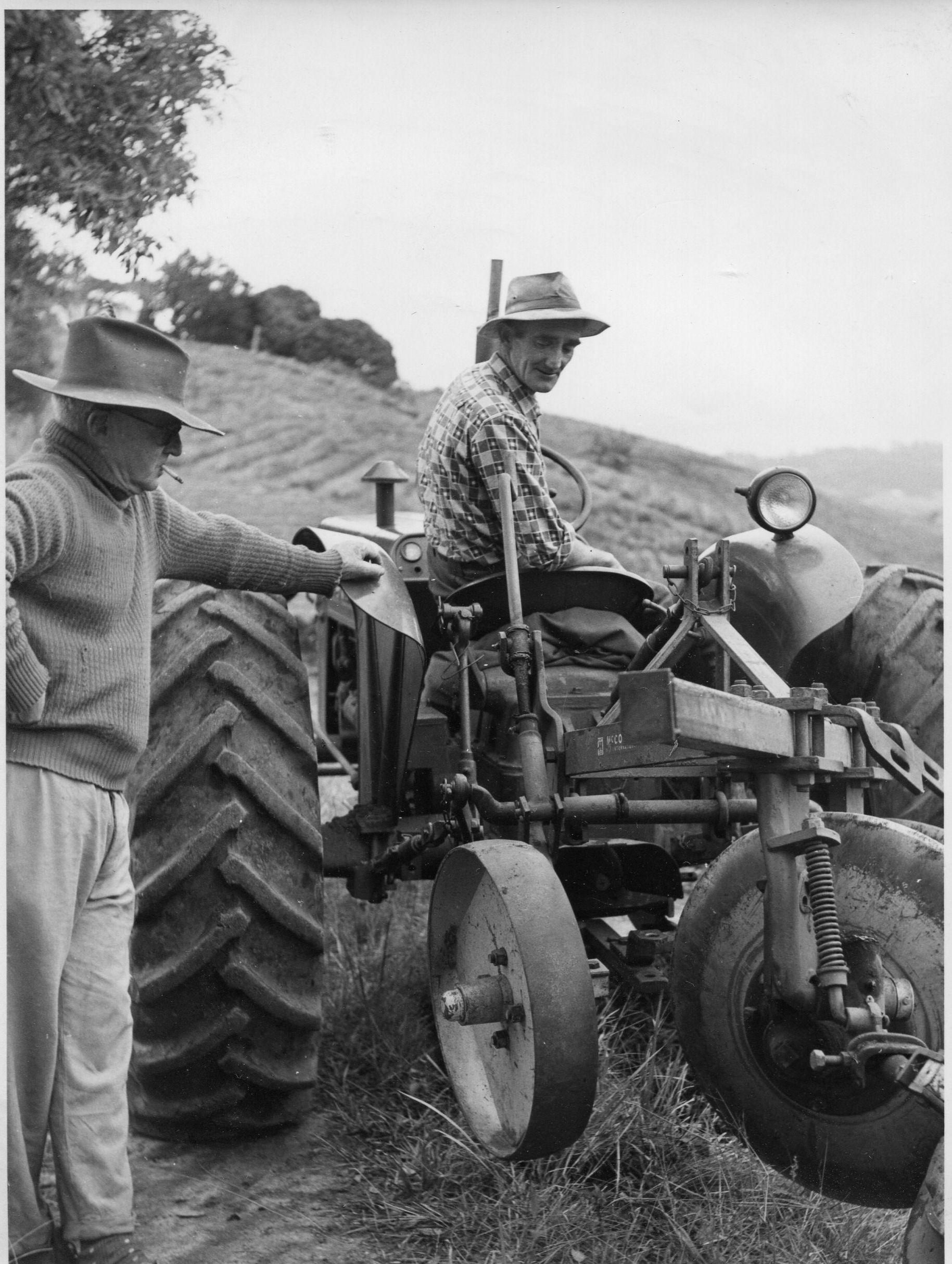